Edmonton Journal Coverage: Cat Festival back for another fur-tual edition

We were thrilled to get such a great story about the Fur-tual Edmonton Cat Festival (May 29 & 30, 2021) written by Fish Griwkowsky in the Edmonton Journal.

Edmonton International Cat Festival back for another fur-tual edition 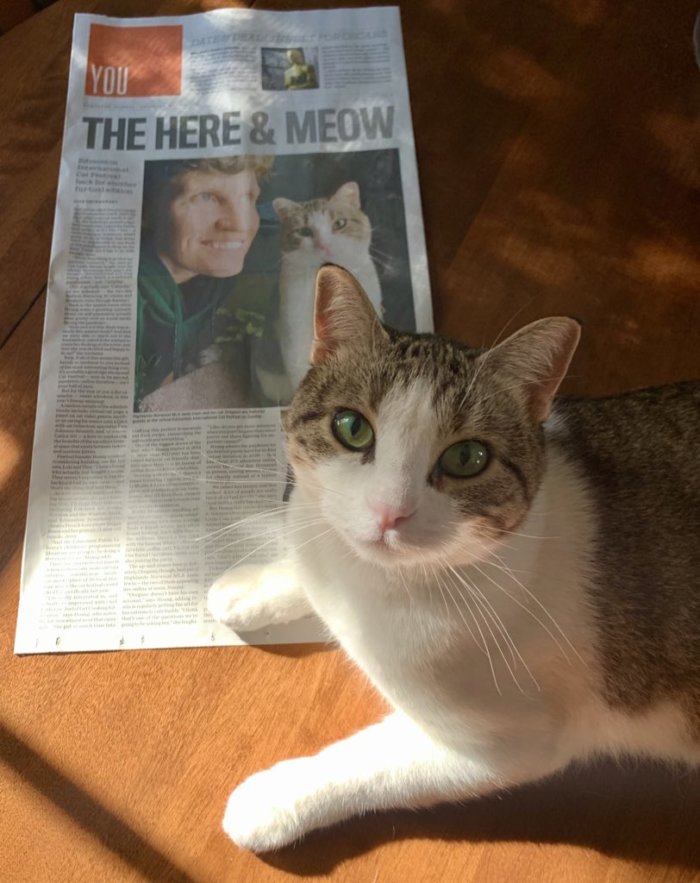 Ever notice when you put a magazine down on the couch, that’s the exact place your cat needs to sit?

So did American animal cognition researcher Gabriella Smith, lead author of If I Fits I Sits — a study looking at, in essence, what’s going on in cat brains that draws them so predictably to any book or box you happen to drop on the floor.

Turns out it has to do with straight lines.

(Yes, it actually says “Caturday” on the schedule — the two-day festival, featuring 30 events and speakers, runs through Sunday.)

Back to the spatial meow-stery, Hoang notes a growing curiosity about cat self-placement actually went pretty viral on social media during the pandemic.

“How cool is it that there was actually this animal study? And that we were able to reach out to the lead author, asked if she wanted to share her findings at the event, and that she was thrilled and happy to do so?” she exclaims.

Now, if all of this seems like gibberish or madness to you instead of the most interesting thing ever, it’s probably a good sign the annual Cat Festival — now in its second, pandemic-online iteration — isn’t your ball of yarn.

But for the rest of you a-fur-cianados — sweet whiskers, is this year’s lineup amazing!

A random sample of the schedule blocks include virtual cat yoga; a panel on cat video games; another on caring for senior cats; a Q&A with cat behaviour specialist Pam Johnson-Bennett; and, of course, Catios 101 — a how-to explaining the benefits of the excellent liminal space that exists between indoor and outdoor kitties.

Festival founder Hoang is indeed considering building one for her cats, Loki and Thor. “I have a friend who actually just bought a house. They weren’t expecting it, but the backyard had its own catio — and that’s the thing that sold them.”

“And the Edmonton Public Library’s children’s programming librarians are going to be doing a storytime for us,” Hoang adds.

There are instructional panels on how to draw cats, make cat toys and even — new this year — an online marketplace of 20 local vendors, which the cat festival crowd asked for specifically last year.

“I’m really interested in, and actually so impressed with chef Katherine Joel of Get Cooking Edmonton,” said Hoang, who notes the kitchen wizard went that extra mile. “She put so much time into crafting this perfect homemade pet food recipe, researching the nutrients and everything.”

One of the biggest draws of the fest, which Hoang started in 2014 — more than $117,000 has been raised for local cat-friendly charities since then — is its lineup of online-famous feline celebrities.

Starting with the local, there’s a panel featuring Cypress, and Kitty Mojito & Lynx (@mynameiscypress and @kittymojito on Instagram), and it’s here their owners will share tips on how to boost your cat’s online domination.

Rocky Mountain-dwelling adventure cat Gary (@greatgramsofgary) returns with some footage from a kayak where he’s often found lurking. Each with fans in the millions, there’s a live Q&A with the famous White Coffee Cat (@white_coffee_cat) and Tik Tok star One Eared Uno (@one-eared-uno) also joining the party.

The up-and-comer here is definitely Oregano, though, best pal of Highlands-Norwood MLA Janis Irwin — the two of them appearing live online at noon, Sunday.

“Oregano doesn’t have his own account,” says Hoang, adding Irwin is regularly getting fan art for her extremely cute buddy. “I think that’s one of the questions we’re going to be asking her,” she laughs. “Like, do you get more attention when you post Oregano than when you’re out there fighting for important causes?”

Hoang admits the pandemic hit the festival pretty hard for its first virtual iteration in 2020 — they had about 375 attendees online versus the usual few thousand in person, raising around $5,000 for charity instead of a typical $20,000-plus.

“We raised less money, and that sucked.

“A lot of people are really tired of virtual events,” she said. “And that’s a really big challenge.”

“And we teamed up with an Alberta pet store, Homes Alive Pets, and they actually donated 5,000 pounds of cat food to different rescues. That’s a lot of fed cats,” she said happily.

Tickets for the Edmonton International Cat Festival this year are $20 per computer with an option to donate up to $100 — 100 per cent of proceeds going to the aforementioned charities.

“The feedback we got from the people who did it last year is that they loved that they could rewatch sessions,” Hoang notes of the virtual upside. “People said that they hoped when we go back to physical, we’ll still do some type of virtual or virtual live stream components.”

She echoes what the pandemic film festivals have been noticing — thanks to our increased Zoom literacy, the world’s essentially become a smaller place.

“We’ve actually got so many different celebrity/special appearances and guests streaming in from all across North America now. And it’s really nice, we wouldn’t have been able to have them if it wasn’t virtual.”

But really, that also comes down to the whim of the particular cats.

“For flying in our celebrity cat guests, we’ve had people in the past decline because they weren’t sure if their cat would do well on a plane, or the cat doesn’t really travel. Because,” she laughs, “actually cats do prefer to be in their homes.

“So, you know, we can all be home together!”

There it is then. Pull up your favourite spot on the sofa and we’ll see you at the fest! Just make sure you didn’t accidentally leave a magazine there, or you know who will have claimed your spot already.