Thanks to the Edmonton Journal’s Fish Griwkowsky for this great preview of the upcoming Edmonton International Cat Festival: Online Edition, taking place this Caturday, May 30, 2020 from 10 a.m. to 5 p.m.

Cats on the Internet — but who’s ever heard of such a thing?

Jokes aside, when the Edmonton International Cat Fest was squirt-bottled off the table by COVID-19 earlier this year, fans of the event quickly reached out hoping for an online version. This is now happening Saturday at edmontoncatfest.com.

Cheerfully, organizer Linda Hoang explains, “The pivot to online seemed easier for us than, say, a folk fest — where so much is that atmosphere, that live vibe. Of course we’ve heard from people over the years that they loved the energy of being in the room with so many cat lovers — you finally found your people — so you lose that, for sure. But then it was a matter of finding programming that fits.

“And honestly, one of the reasons the festival started was to try and get everyone together to watch cat videos,” she laughs. “And we thought, you know, we could still watch cat videos online, and together now. So what else can we do?”

Starting at 10 a.m. Saturday, turns out quite a lot, really — more than seven hours’ worth of content, including a cat drawing workshop with Heather Simonsmeier; Nicole Ashley Photography’s cat portrait tips; Marty Chan reading cat stories; and how to make homemade cat treats with Chris and Hana.

“Most everything for the virtual event is going to be useful and educational,” says Hoang, also known for her roving tours of Instagrammable walls in Edmonton. “But it was also important to find musicians who love cats to play music.” This would be Jordan Norman and Megan Evans.

The festival’s live-streamed content is broadcast from everyone’s — meaning the cats’ — homes. It will also be available afterwards for about a week if you’re heading out into the tenuous world.

“But you’ll be able to bring it with you everywhere you go, so even if you’re just sitting in the yard …”

One of the biggest draws of Cat Fest has been meeting celebrity cats. “There is a really popular adventure cat who lives in the Banff-Canmore area, Great Grams of Gary, who regularly goes on kayaks,” notes Hoang of this year’s return guest.

Rather than in-person selfies, fans can pose for screen shots with Gary during a virtual meet and greet. At this Hoang bursts into laughter.

Past celeb-purr-ties (sorry) have included Nala Cat, Luna Rose, Pudge the Cat, Suki Cat and, through a virtual feed, Lil Bub — who boasted 2.4 millions followers before she died last year.

Pisco, who had to cancel this year because of the pandemic, will hopefully be back for 2021.

Memes have abounded since the lockdown began, including a few noting how dogs love that we’re stuck at home, cats perhaps not so much in that we’re in their space all the time, the bums they knew we always were.

Hoang laughs when I mention how my cat Walnut now wakes us up at 6 a.m. on the nose. “Oh yeah, whenever they want. I have two cats, Loki and Thor. Thor is less affectionate than the other. If, for whatever reason, she tries to cuddle during the day while I’m working I have to stop everything. I wait until the cuddle is done.”

This leads into unpacking cat yoga, which will be online this year.

“I’ve actually done goat yoga. That’s a lot dirtier,” Hoang laughs. “In the physical event, we had 30 people with kittens and cats roaming the room. While you’re doing a pose they might come and sleep on your mat.”

Hoang notes, “The nice thing about cat owners is they understand if you get scratched that’s part of it. We had a note for people to let the cats come to them, not pick them up. The nice part about this having gone virtual is you can now do the yoga with your own cat.

“So you’ll know your own cat’s limits better.”

Since 2014, Cat Fest has raised $112,000 for a rotating group of charities — and this year’s $10 ticket goes entirely to ARTS Senior Animal Rescue, Little Cats Lost and Second Chance Animal Rescue.

“I’m curious to see how this does. If it’s a smaller group we’re still celebrating cats — but I really hope to raise a decent amount of money for the rescue.

“It’s a good cause. We understand $10 may still be a lot for someone, but we think with the $10 price even if you are able to catch one or two session that’s good value for the money. It’s a sliding scale, so you can donate more if you want.”

It’s easy to register — click through edmontoncatfest.com — and you’re good to go.

“And hey, no worries about allergies with this fest!” 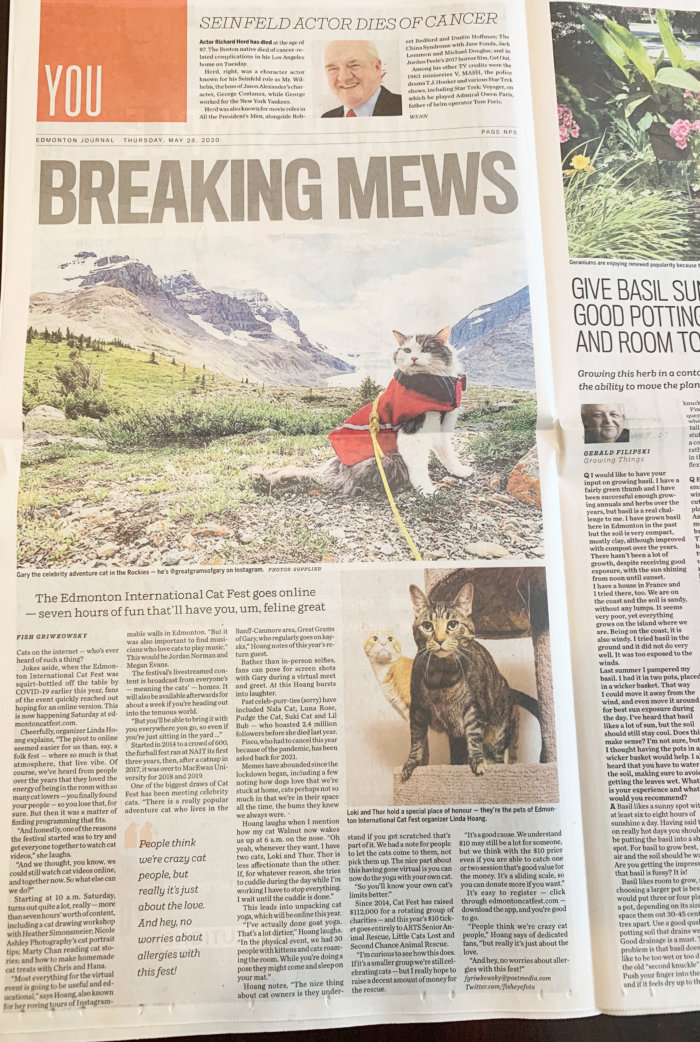