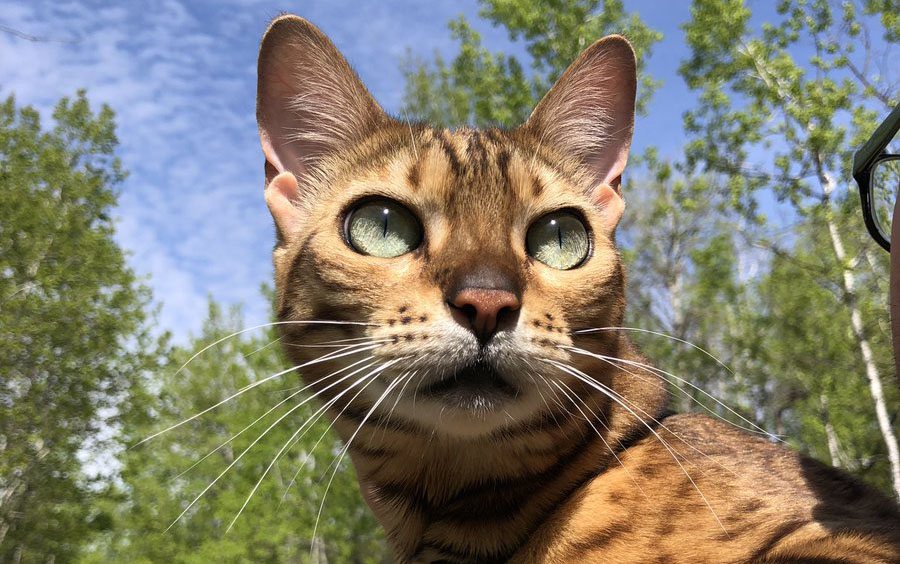 Martina Gutfreund didn’t intend for her cat to become an international celebrity.

The Edmontonian began sharing photos of little Suki on her photography account for fun. She said the Bengal cat caught the attention of social media very quickly.

“I had a large photography page before we got Suki in 2017, it was at 400,000 followers. I was posting photos of her as a kitten on my page and those photos were getting five times the attention that my photography was getting,” Gutfreund laughed.

She quickly made Suki her own Instagram page, to keep things separate.

“I was getting a little embarrassed. This cat was taking over my work page! After I made her one, it took over my social media following in two months. It was pretty funny.”

Suki’s passport might make you a bit envious. She’s been to 12 countries, including Canada the States and several in Europe.

“We took her to Europe for two months last year. She went to so many places: Germany, France, Italy.”

The cat has been an outdoor aficionado since Gutfreund adopted her.

“We started taking Suki outside at three months, after she got all her shots. We started getting the harness on her, which was a difficult step, but with enough treats, she started to realize if she puts it on she gets all the treats she wants.”

Gutfreund admits Suki was a “pretty crazy little cat” at the beginning, but she’s calmed down a bit over the years.

Gutfreund said the cat even has a favourite destination spot.

“She probably enjoyed the Czech Republic the most. We went during fall, it was so incredibly beautiful. So many colourful trees and rivers. She was completely in her element.”

Suki will be attending the 5th edition of the Edmonton International Cat Festival on Saturday.

“You don’t see a lot of outdoor cats. I think people are really attracted to the mountains and it just so happens that Suki spends a lot of time outdoors. She’s kind of out doing all of the things that you wish you could do,” organizer Linda Hoang said.

Though she may be a celebrity guest, Suki hasn’t let things go to her furry head.

“She’s just a regular cat. I don’t think about it much until we are on the trail and she’ll get recognized. People are so ecstatic to meet her. Generally, it’s not something I think about much. We’re already out there taking photos [as a career] but getting to do it with Suki is amazing.”

You don’t have to take your pet to Europe to have your own “adventure cat.” Gutfreund shared some tips on getting your feline outdoors.

“Starting slow is important. Stop as soon as your cat gets frustrated. With the harness, we stopped with Suki as soon as she got grumpy. You know your pet best.”

You can buy tickets to the Edmonton International Cat Festival here.